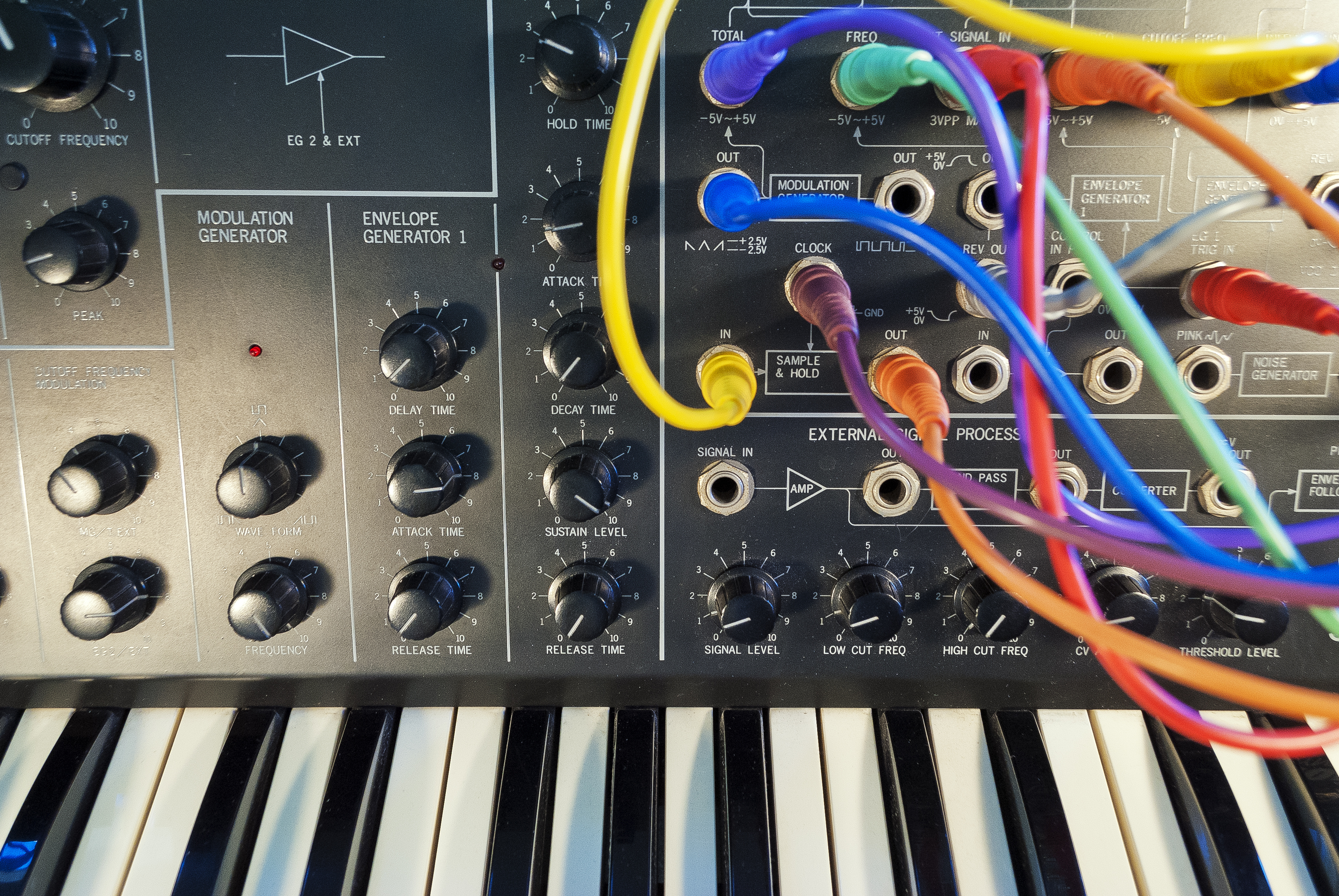 With readily available and inexpensive devices, it is more possible than ever before for students to create their own sonic worlds. In particular, the modern analog subtractive synthesizer, used by musicians and sound designers, is an incredibly powerful tool for sculpting sound; the analog synth can be a simpler yet more involved alternative to the digital synths that have been available for years, with their preset sounds. Although analog synths have sometimes been regarded as merely toys that go "beep" and "boop," these devices can provide deeply meaningful, immediate experiences for students, who have to manipulate all the parameters of sound themselves. This sort of synth also has the power to add the elements of STEAM - Science, Technology, Engineering, Arts, and Math - to your program, along with engaging students who may be be invested in traditional implements of music in school.

What is a modern analog subtractive synthesizer? Simply put, it is an instrument that converts pure (analog) electricity into sound. How? Imagine that you are standing at the beginning of an infinitely long hallway and in your hand is a red rubber ball. If you took this bouncing action, which makes a sound each time it bounces, and sped up the frequency of the bouncing, it would eventually get so fast that it would produce a single tone. If it helps, think about how a car engine seems to have a constant hum, even though it's just individual cylinders quickly firing at different times. This is precisely how the circuits in an analog synthesizer create sound. They "oscillate," or bounce electricity back and forth so quickly that are audible and identifiable to the ear. This is why these circuits are called "oscillators."

Oscillators can bounce electricity in different shapes, affecting the timbre of the tone generated. These shapes are usually defined as square, sawtooth, and triangle. A free-to-use, browser-based example is the Oscillators app offered in Google's Chrome Music Lab. User can click on differently shaped oscillators to activate them, then change the frequency of the oscillation. By keeping the frequency value low enough and steady, you can hear each individual click of the "bouncing red ball."

Beware: Encourage healthy headphone-wearing practices throughout all sonic exploration. The prospect of turning electricity into sound might be overwhelming for a novice due not only to the synthesizer's tendency to sound shrill, loud, and abrasive, but also due to the ever-tweakable depth of possibilities for both the tone and timbre of the instrument. The possibilities for "beeps" and "boops" can be rewarding, as well as treacherous. It is important to show students how to make sounds more manageable and appealing to the ear very early in the exploration process.

Other forms of electronic synthesis beyond analog subtractive synthesis feature different timbral tendencies, functions, and price-tags, such as pulse-code modulation (PCM), additive frequency modulation (FM), and granular synthesis. But none of these options offer such a tactile, tweakable experience with so many different and understandable packages as the analog subtractive synthesizer.

Calling synthesis "subtractive" is a way to describe the architecture of the instrument and how it produces tone. This means that each method of shaping and sculpting sound can be systematically subtracted until you are only left with the most essential material: the oscillator. This would be comparable to how chiseling is subtractive, the way that a block of stone is chiseled away to create a sculpture.

Subtracting and separating functions in the production of electronic tone makes "tweaking" sound immediately possible and highly engaging to the user. Synthesizers can also yield sudden, dramatic changes in multiple parameters of the sound that can be exciting to the ear. While cool to manipulate and hear, these changes can sometimes be stumbled upon by a novice and not be immediately replicable. Electronic music-making can often be viewed as a way of just pressing a button and getting lucky. But is such exploration a bad thing? Why can't one lucky moment turn into a powerful discovery?

To help harness that teachable moment, it helps to understand the building blocks of the synthesizer. The separated functions of the instrument can vary slightly among different models, and they can be variably organized and layered. In its simplest form, there are three core functions in a subtractive analog synthesizer.

Each function of the synthesizer can change its rate of attack, decay, sustain, and release (ADSR). In fact, all sounds can be described in ADSR terms. The sound of a clap of thunder would have a quick attack and slow release, for instance. Conversely, a loud, long slurp of a singular noodle may have a sound that has a slow attack, but very quick release. In synthesized sounds, these parameters can be instantly changed.

In previous generations, synthesizers with these capabilities cost thousands of dollars, making them accessible to only an elite class of musicians. Recent technological developments have made synthesizers more affordable and accessible. Software-based synthesis is free or inexpensive, with browser-based Digital Audio Workstation (DAW) synthesizers available online that can emulate the analog synth experience. MusicFirst offers Soundation, a browser-based DAW. Soundation's MIDI channels provide four different synthesizers, including a "Simple Synth" with an intuitive four-oscillator interface, two envelopes, and a filter. More advanced users will appreciate Soundation's VA (virtual analog), FM (frequency modulation), and "Wub Machine" synths. Soundation allows the immediacy of sculpting sound and the ability to record and write songs with user-created sounds in a single package.

If you're interested in engaging pupils with new, interesting sounds, the analog synthesizer can easily be used to accompany an ensemble, help with teaching and engaging a piano class, or play an important role in student composition. By connecting to students' sonic worlds, and giving them tools to shape that world, we can empower another generation to create.

Zachary Gates is a middle-school choral and piano teacher, guitarist, and producer for local musicians in central New Jersey. He has performed works with the New York Philharmonic, Berlin Philharmonic, as well as presented on technology & arts in education at conferences throughout the United States.